Do Nothing Democrats Have Done Nothing But Obstruct And Throw Trantrums

Rather Than Working On Critical Legislation, Democrats Have Wasted The Past Years On Baseless Investigations And Obstructionist Histrionics

FOR TWO YEARS, DEMOCRATS HAVE WASTED TIME AND MONEY ON INVESTIGATING THE PRESIDENT OVER FALSE ALLEGATIONS OF COLLUSION WITH RUSSIA

SINCE THE PRESIDENT WAS ELECTED, DEMOCRATS HAVE BEEN PUSHING TO IMPEACH HIM

FOR THE LAST 176 DAYS, DEMOCRATS HAVE BEEN TRYING TO IMPEACH THE PRESIDENT OVER BASELESS CLAIMS OF A QUID PRO QUO ARRANGEMENT WITH UKRAINE

IN CONGRESS, DEMOCRATS HAVE BECOME BLATANT OBSTRUCTIONIST AND REFUSED TO WORK WITH THE PRESIDENT AND REPUBLICANS ON ANYTHING

For Two Years, The Democrats Pushed A 30 Million Dollar Investigation Which Eventually Exonerated The President

Through September 2018, The Mueller Investigation Was The Second Most Expensive Per Day Investigation Dating Back To The Creation Of The United States Special Counsel’s Office In 1979.  (RNC Research, 03/24/19)

Number Of Witnesses Who Were Interviewed Or Testified To The Special Counsel’s Team: Approximately 500 (RNC Research, 03/24/19)

The Mueller Report Definitively Stated Their Report “Did Not Establish That The [Trump] Campaign Coordinated Or Conspired With The Russian Government In Its Election-Interference Activities.” (Department Of Justice, 4/18/19)

Based Off The Evidence Provided In The Mueller Report, The Department Of Justice Determined President Trump Did Not Commit Obstruction Of Justice. BARR: “After carefully reviewing the facts and legal theories outlined in the report, and in consultation with the Office of Legal Counsel and other Department lawyers, the Deputy Attorney General and I concluded that the evidence developed by the Special Counsel is not sufficient to establish that the President committed an obstruction-of-justice offense.” (Department Of Justice, 03/24/19)

SINCE PRESIDENT TRUMP CAME TO OFFICE, DEMOCRATS HAVE SPENT ALL THEIR TIME TRYING TO IMPEACH HIM

In April 2016, Six Months Before He Was Elected President, Politico Published An Article Entitled: “Could Trump Be Impeached Shortly After He Takes Office.” (Politico, 04/17/16)

The Nation In February 2017: “Congressional Democrats Are Already Warning Trump About Impeachment” (The Nation, 02/13/17)

In May 2017, Rep. Al Green (D-TX) Called For The President’s Impeachment. “Democratic Rep. Al Green of Texas called for the impeachment of President Donald Trump Wednesday morning, the first member of Congress to officially request leveling charges against the President from the House floor.” (CNN, 05/17/19)

Sen. Richard Blumenthal (D-CT) In August 2018: “We’re In A Watergate Moment.” BLUMENTHAL: “We need to begin. The Senate Judiciary Committee is composed of senators who are going to be there after the midterm election, two-thirds of us. So I think the beginning has to be set and marked right now. And Wolf, we’re in a Watergate moment, where the two parties have to come together.” (CNN’s “The Situation Room,” 08/21/18)

Over The Last 176 Days, Democrats Have Been Trying To Impeach The President Over Baseless Claims Of A Quid Pro Quo Agreement With Ukraine

Number Of Witnesses Deposed By The House Intelligence Committee: 18 (The Washington Times, Accessed 01/23/2020)

Number Of Hearings Spent On Impeachment In The House: 13 (Compiled By RNC Research, Accessed 01/31/20)

Time Spent On Impeachment In The House And Senate Combined: 141 Hours And 39 Minutes Or Nearly 6 Days Straight Worth Of Impeachment (Compiled By RNC Research, Accessed 01/31/20)

Remember, We’ve Heard From All The Witnesses; They’ve Made It Explicitly Clear There Was No Quid Pro Quo Undermining The Crux Of The Democrats Argument Against The President

Witness Tim Morrison Said Nothing Concerned Him About The July 25th Phone Call. GOP COUNSEL STEVE CASTOR: “Mr. Morrison I want a turn our attention back to the July 25th call, you were in the room. Did anything concern you on the call?” FORMER NATIONAL SECURITY COUNCIL OFFICIAL TIM MORRISON: “No.” (RNC Research, 11/19/19)

Director For European Affairs On The National Security Council Alexander Vindman Testified That He Cannot Remember Any Ukrainian Ever Mentioning Any Pressure To Do Investigations. DEMOCRAT COUNSEL DAN GOLDMAN: “After this call did you ever hear from any Ukrainians either in the United States or Ukraine about any pressure that they felt to do these investigations that President Trump demanded?” LT. COL. ALEXANDER VINDMAN: “Not that I can recall.” GOLDMAN: “Did you have any discussions with officials at the Embassy here at the Ukrainian embassy here in Washington DC?” VINDMAN: “Yes I did.” GOLDMAN: “Did you discuss at all the demand for the investigations with them?” VINDMAN: “I did not.” (RNC Research, 11/19/19)

WHILE THEY’VE BEEN OBSESSING OVER INVESTIGATING THE PRESIDENT, DEMOCRATS HAVE BEEN AVOIDING THEIR CONGRESSIONAL RESPONSIBILITIES AND HAVE ENGAGED IN PARTISAN OBSTRUCTIONISM

Democrats Have Engaged In Blind Obstruction Of President Trump’s Nominations For His Administration; They Backed Only 39% Of His Nominees In The 115th Congress, And Just 34% In the First Six Months Of The 116th 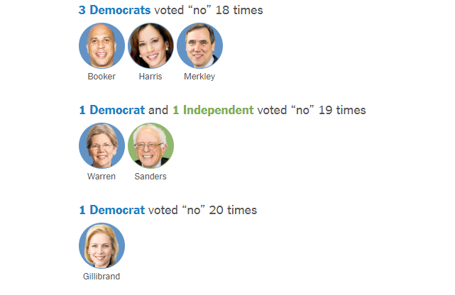 Sen. Warren And Sen. Gillibrand Have Only Voted In Favor Of 11% Of Trump’s Nominees Over The Past 2 ½ Years. “Warren and Gillibrand have voted in favor of just 11 percent of Trump’s nominees over the last 2 ½ years. The two Democrats have voted to confirm only six of his judicial nominees — all in the 115th Congress. This year, they have voted to confirm just three of Trump’s nominees, including two members of the Export-Import Bank and a member of the Federal Highway Administration.” (The Hill, 07/13/19)

The Public Has Shown That They Do Not Have The Same Extremist View On Immigration Than The Democrats Have. “But when it comes to immigration, public sentiment is not overwhelmingly on the Democrats’ side. Although the electorate has generally become more accepting of immigrants over the past few decades, there is no clear mandate for either party to adhere to as they look to rewrite immigration laws.” (Roll Call, 04/17/19)

The United States Reached A Deal With Mexico And Canada On The USMCA On September 30, 2018. “On Sunday night, President Trump got his wish for a significantly revised North American trade deal. After more than a year of intense negotiations, the United States, Canada and Mexico reached an agreement to update the North American Free Trade Agreement, the 1994 pact that governs more than $1.2 trillion worth of trade among the three nations.” (The Washington Post, 10/1/18)

House Democrats Didn’t Agree To Move Forward With The USMCA Until December 10, 2019. “House Democrats and the Trump administration have reached an agreement to move forward with the White House’s replacement for the North American Free Trade Agreement, top Democrats said Tuesday.” (CNBC, 12/10/19)

As Early As April 28, 2019, The Wall Street Journal Reported That Democrats Were Seeking To Deny The President A Political Win By Stalling On The USMCA. “But with the U.S. election season approaching, some Republicans and trade experts said Democrats may be seeking in part to deny Mr. Trump a political win—or at least to exact a heavy price for advancing the deal.” (The Wall Street Journal, 04/28/19)

In May 2019, It Was Reported Speaker Of The House Nancy Pelosi Had Privately Said She Could Get The Trade Deal Approved But Was Determined To Prolong Debate Regarding The Bill’s Provisions. “Ms. Pelosi has said privately that she is convinced the agreement can be approved — ‘I can get to yes’ she told a supportive lawmaker last week — even if that would hand Mr. Trump with a much-needed domestic policy achievement ahead of his re-election campaign. But the president’s slight, in that it was a factor at all, only reinforced Ms. Pelosi’s resolve to extract significant revisions to the accord as a precondition of holding a floor vote, and those changes could require a renegotiation of the updated North American Free Trade Agreement, which the three countries agreed to last year.” (The New York Times, 05/29/19)

In December 2019, Prominent Progressive Voices Were Even “Dismayed Nancy Pelosi And Her Caucus” Handed President Trump A Win By Finally Agreeing To The USMCA. “After months of haggling over key details, House Democrats have officially agreed to back the White House’s updated trade deal with Mexico and Canada—and progressive commentators are furious. Some prominent voices are dismayed that Nancy Pelosi and her caucus have decided to hand Donald Trump a win on one of his signature policy issues, which might help his reelection chances.” (Slate, 12/10/19)